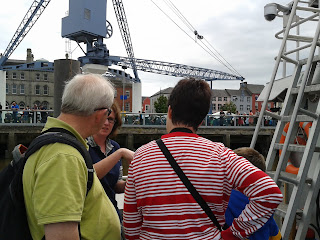 The RV Keary, a 15m aluminium catamaran is a state-run marine research survey vessel built for and operated by the Geological Survey of Ireland (GSI). Its primary function is to provide an inshore survey capability for the national INFOMAR programme (INtegrated Mapping FOr the Sustainable Development of Ireland’s MArine Resource).

The RV Keary’s first INFOMAR survey leg of 2011 took place in Waterford Harbour, starting in mid-April and finishing in mid-June.

The campaign focused on mapping the navigational channel in advance of the Tall Ships Festival which took place at the end of June, with mapping of the shallower areas along the river banks and shore being carried out by the GSI's 7.5m RIB, RV Geo. This was the first time that both vessels have worked in tandem.

Having successfully mapped the estuary the RV Keary was invited to participate in the Tall Ships Festival. The RV Keary was positioned in Waterford Marina beside The Revenue Commissioners customs cutter, the RCC Faire. The Keary was open to the public from Thursday afternoon June 29th until Saturday evening on July 2nd. 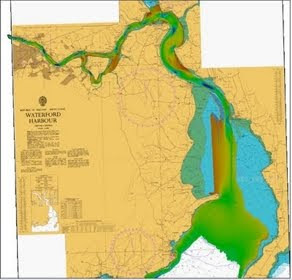 Seabed mapping of the estuary took place in an area west of the city's Rice Bridge to the open sea at the mouth of Waterford Harbour. 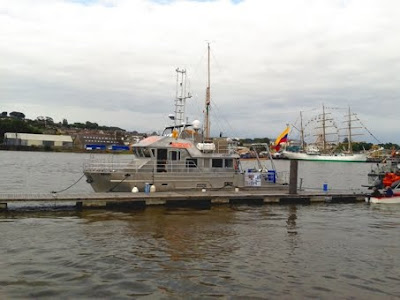 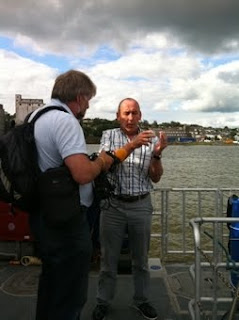 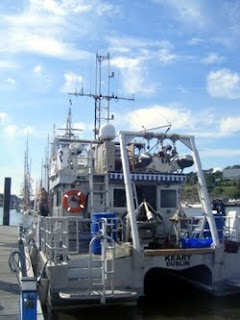 The tour commenced on the back deck where a brief introduction to the RV Keary, the 'Real Map of Ireland', the GSI, Marine Institute (MI), INFOMAR project and the survey acquisition systems and instrumentation was provided. Visitors were also shown the mapping tools used onboard such as the side scan sonar, the magnetometer and the grab sample equipment on the back deck and invited to ask questions on any aspect of the INFOMAR programme. 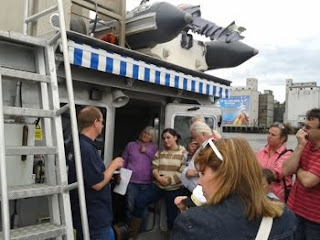 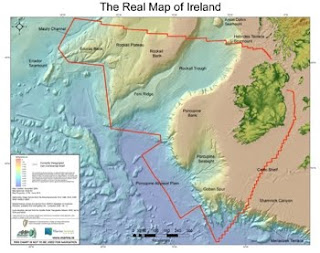 Following this, the groups were presented with an overview of the data acquired during the Waterford Harbour survey on the data processing pc. Features of interest in the data were highlighted, in particular a 60m shipwreck discovered opposite the marina in Waterford city. This vessel is believed to be the cargo ship the S.S. Harvard, dating from 1870, now embedded in a scour feature in the river bank just a kilometre from where the R.V. Keary was berthed. Also of great interest was the detailed imagery of whirlpool scours (dark blue - purple), created where the river flow meets the tide. 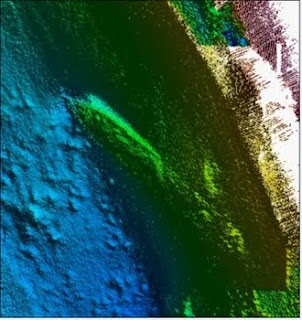 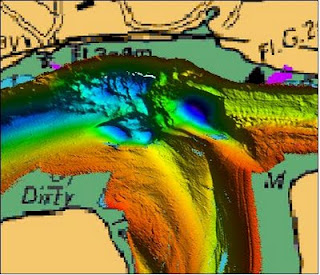 Next the group was invited to view the 'pod' which is located in the middle of the vessel between the two hulls. The pod is designed to accommodate the geophysical equipment onboard such as the single beam head, multibeam heads, chirp, USBL transceiver and SV sensor in one housing. The pod is mounted on a hydraulic ram that can raise and lower the instrumentation into and out of the water. Once the pod has been lowered into the survey position, lateral rams lock the pod in place to ensure that the system is stable and the instrumentation is in the same position each time the pod is moved.

Finally, a tour of the bridge and its instrumentation was provided. The Navigation and Communication Equipment was explained including the POS MV (GPS technology) which logs all motion information in space and time, allowing the removal of the vessels motion from the sonar and shallow seismic datasets. Also, the forward looking sonar which provides information about the nature and depth of the seabed ahead of the Keary and the auto pilot steering of survey lines. A 3D fly-through of Waterford Harbour on display generated huge interest with visitors receiving a 3D visual of the seabed of Waterford harbour.

To the delight of the visitors onboard, RV Keary and Real Map of Ireland postcards were distributed along with copies of Inshore Ireland ( with Keary articles), and information on the copper coast geopark project and Marine Institute, not forgetting our younger visitors, the kiddies who received lollipops! The visitors were then free to explore the front deck of the vessel and take photographs.

Over 1,000 people came onboard to visit the RV Keary on guided tours over the three days and the positive feedback and interest in the INFOMAR programme and the data being acquired was exceptional.

On the final day of a highly successful Tall Ships event, the RV Keary participated in the 'Parade of Sails' on Sunday 3rd July. The parade was led by the naval vessel the L.E. Aoife, followed by the RCC Faire with the RV Keary in third position ahead of the biggest tallship the Russian owned 'Mir' and the remainder of the Tall Ships fleet. 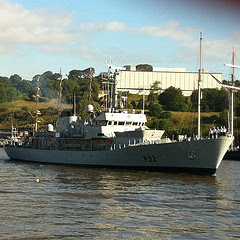 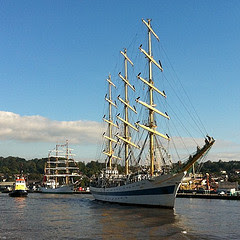 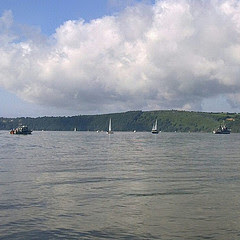 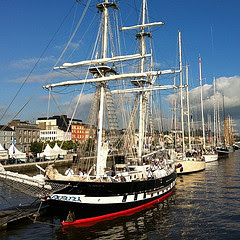 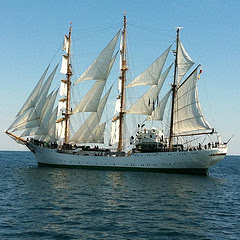 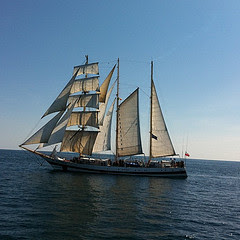